The strengths model provides an overview of someone’s Skills, Values and Passions, which are the three basic elements a person needs to reach their goal. You can find an illustration of the strengths model below.

Skills disclose what someone is naturally good at. Allow me to explain using an example. William is 45 years old and has worked for a large insurance company for 10 years now. One of his skills is that he is a good listener, which he has been ever since he was a kid and it’s something that comes naturally to him. Values reflect someone’s core and what they think is important in their world. William, for example, is an honest man and greatly values honesty in those around him. Passions describe where someone’s interests lie and what drives them. William is driven by social issues that revolve around the individual and society.

All three strengths elements are equally important in reaching your personal goal. The goal is that speck on the horizon, the thing you (consciously or unconsciously) work toward in life. When someone can fully express all three elements Skills, Values and Passions in their work, they can reach their full potential. They recognize their true self, and what their natural skills and needs are, and this generates energy.

Let’s get back to William. He is a good listener, an honest man who greatly values honesty and is driven by social issues. William works as a callcentre agent for an insurance company. He is responsible for selling as many insurance policies as possible. His daily target is high. His boss has ordered him that each telephone conversation he has should result in a house call. Looking at the balance of his basic skills, values and passions, there appears to be little connection with the elements he relies on in his current job. The result is a huge loss of energy and potential. (Look at work situation A). 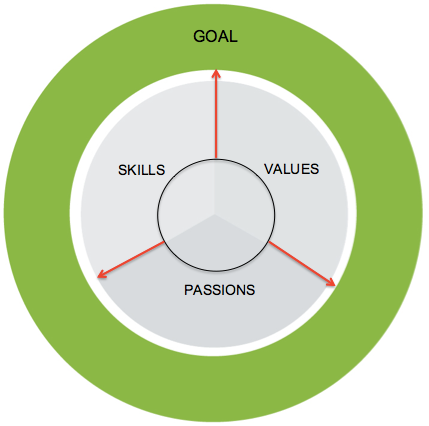 This is the work situation of someone who can only use a small part of his skills, values and passions, which leads to a loss of potential. The sum of the red lines indicates someone’s ‘energy leak’. The shorter the total length of the red line, the more this person works from their strengths, thus making the organization stronger.

William’s job does not match his strengths. Now, if he were employed as a coach for young adults or drop-outs, helping them to return to school, the story would be completely different. Then, he would be using his skill as a listener, he would be honest about what he observes in his clients and what the consequences of their behaviour are, and he would contribute to society. (Look at work situation B).

B. Work situation diagram B 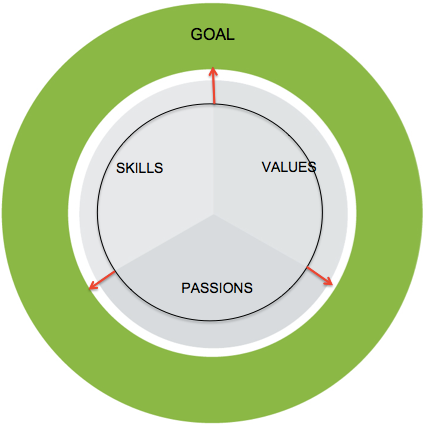 Work situation B belongs to a person who is able to put a lot of their natural skills, values and passions into their job. They make far better use of their potential and are more balanced because it ties in better with their personal goal. This person has a higher energy level and would be more valuable for your organization.

All three elements are equally important to allow someone to work better from their strengths.

Even when it is not possible to switch jobs, knowing someone’s strengths can affect growth and the use of potential. Let’s have another look at William’s case.

When William’s manager sees his strengths model, he is startled. Gosh, he hadn’t expected William to be so out of place in his current position. He had noticed that William was ill more often and that when he was there, his energy was low, even though he had started at his job with so much enthusiasm. Now that the manager has a better view of William’s strengths, he decides to take a different approach. They discuss how William prefers his telephone conversations with his customers to go and which situations energize him. William likes to take his time for each customer without putting pressure on people who are not interested. William’s manager allows him the freedom to reach his targets in his own way. Not every conversation has to result in a house call anymore. William can decide for himself how long his conversations will last. William returns to his work feeling relieved and energized. From that day onwards, William uses a different approach. He starts early and is the last to leave. His conversations are longer than those of his colleagues and they result in house calls less often. Nevertheless, he effortlessly reaches his final target. He is far more successful than his colleagues at selling the insurance policies once he is at the customer’s home. He starts to enjoy the job more now that his working practice corresponds to his strengths.